The new Euro competition format
Exploring the consequences of a Euro with 24 teams.
2016-06-11

Here we are. Two years after a wonderful World Cup, the group stage of Euro 2016 has officially started, as Payet fired France to victory in the opening game with an amazing stunner.

France are obviously favorites given their home status, but Germany and Spain remain strong contenders nevertheless. These teams will most likely compete in the later stages of the tournament, but they will have to go through the group stage first. So, what do you need to get out of the group stage?

Wait, before we start, what are the rules of the group stage? Will the goal difference play a role?

The format of the competition changed this year, but the group ranking rules remain the same as in previous versions. The PDF of the regulations can be downloaded on the website of UEFA.

As a reminder, the Euro determines the ranking of teams having equal points in a group by evaluating them only according to the games they played against each other. These criteria are points, then goal difference, then goals scored (article 18.01abc). If some teams are still equal after this step, they are ranked with results from all their games in the group (article 18.01ef).

Finally, if the tie is still not settled, the disciplinary record (yellow/red cards) and then the UEFA ranking decide (article 18.01gh).

In addition to those rules, in case two teams meeting each other in the last game are still equal at the end of the game, the winner is determined by penalty kicks (article 18.02). The winner and the runner-up of each group qualify, while the 4 best thirds of each of the 6 groups go through too. These 4 best thirds are determined according to points, then goal difference, then goals scored (article 18.03abc), then disciplinary record and finally UEFA ranking (article 18.03de).

The rules are clear, so we can start to play with the stats. I created a data set of the group stages of the last 9 Euros back to Italy 1980. There are 168 group matches from 28 groups. I computed the rankings of all these groups, and identified the best two teams of each group, along with the best third. Since older Euros did not have the same number of groups, I chose to take the best third when there were 2 groups, and the best two thirds when there were 4 groups.

Well, what is this useful for?

Using these historical rankings, we can compute some interesting statistics. First, we can take a look at what each team in the ranking looks like in terms of points, goal difference and goals scored. 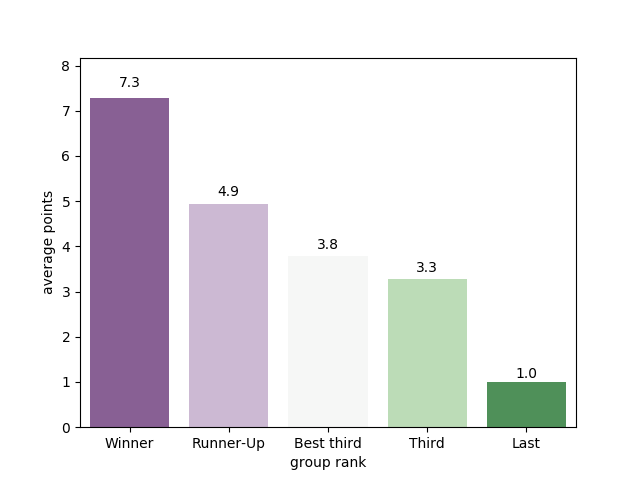 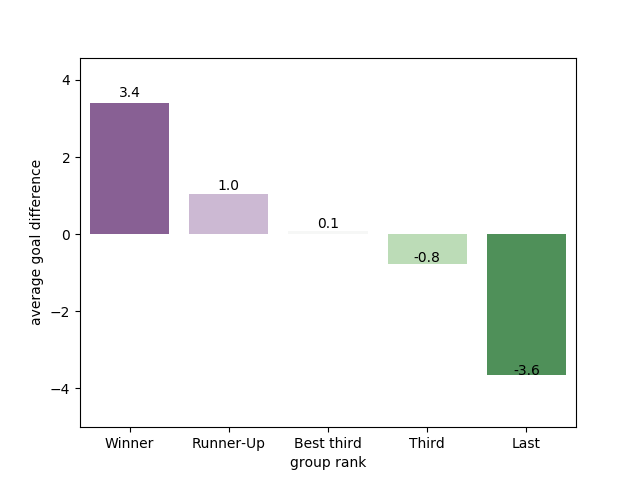 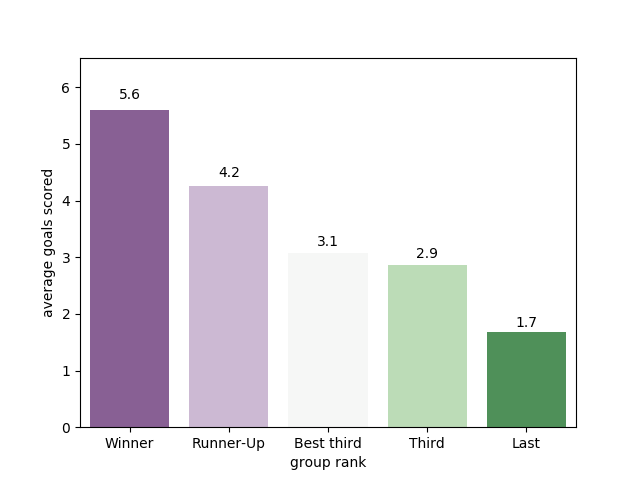 To understand what these numbers mean in a more concrete way, let's visualize them in the scope of Euro 2012, with their line-up in the first game.

We can see that the group winner usually smashes the rest of the group by winning almost all the games. A typical example of this situation in 2012 were the reigning champions Spain, who famously started the competition with no striker and went on to keep their title.

The runner-up usually performs well too, but does not win the game against the winner of the group. The unfortunate semi-finalist Portugal represents this situation. They were beaten by a very strong German side that won all the games of the group.

The best third is trickier to describe, as nobody ever was in this situation at the Euros. The best third usually plays in a strong group where his performances were not enough. If there was a best third in 2012, it would be Croatia. They had the tough task of competing with Spain and Italy, which proved to be too hard for them.

The third team usually wins one game like Denmark, while the last team gets beaten heavily by the other participants of the group like Ireland.

Given the rankings computed earlier, the odds of qualifying are the following: 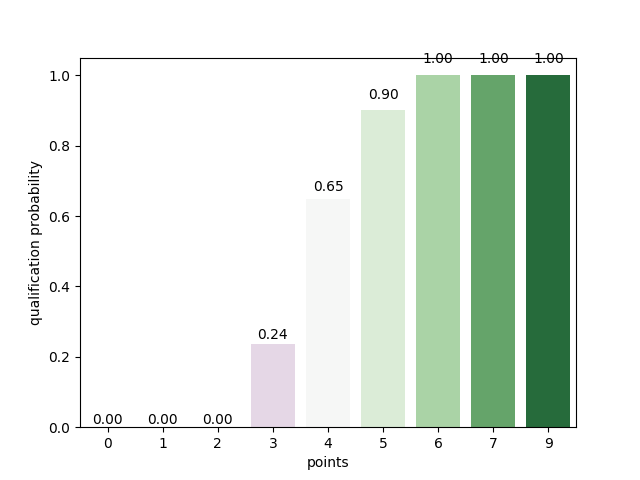 In previous Euros, without the best third rule: 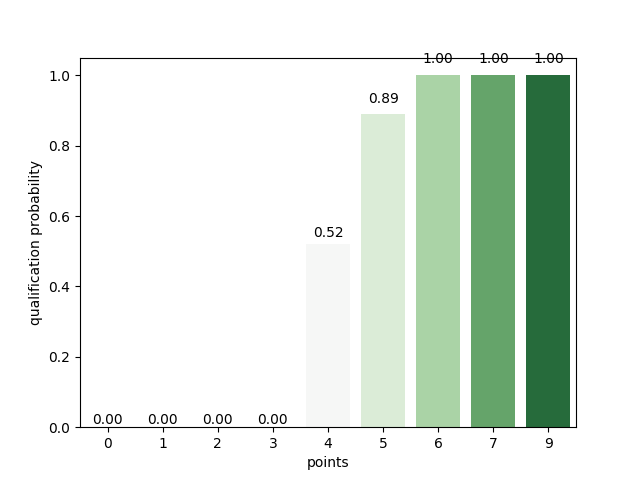 Your team will need at least 4 points to have a good chance to progress to the knockout stage. This statement is arguably counterintuitive at first because the number seems quite low compared to what we expected from (for example) a runner-up at the last World Cup. The reason for this is that the rule of the best thirds makes it easier to qualify for the knockout stage. Indeed, the rule includes half of the participants in the knockout stage, lowering the expectations.

If you think your team can get 4 points from their 3 games, then you can be confident they will qualify. Thanks to the new regulations, the group stage has become less stressful for the big teams, which are more likely to avoid early exit accidents.

Bonus: I have no clue about the number of points my team will get.

At every tournament, many people try to predict the outcome of games. Fortunately, some scientists have made their forecasts available to the public audience. At EPFL university in Lausanne (Switzerland), researchers tried a new model based on the results of individual players in their clubs in addition to international games.